The following announcement was issued by the Press Office of the Ministry of Labor and Social Affairs:

The provision for easier issuance of proof of insurance awareness (as it will be given for small debts, less than 100 euros to e-EFKA) along with a number of other provisions that facilitate employees and insured (abolition of pre-registration of non-employees in e-EFKA with the start of activity , paid leave of 10 days to parents of children with rare diseases, choice of insurance company for insured with dual status) are included in the new provisions that were incorporated in the bill for the modernization of e-EFKA submitted to Parliament. The bill also includes the legislation announced by the Ministry of Labor and Social Affairs for the payment of salaries and insurance contributions of employees whose operations were suspended on January 25-26 by order of a public authority due to bad weather “Elpis” . 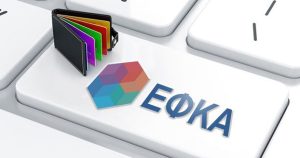 The most important new provisions are the following:

1. Issuance of proof of insurance awareness with debts up to 100 euros to e-EFKA

2. Abolition of pre-registration of non-employees in e-EFKA with the start of activity – Easier the process of starting or changing jobs in the Tax Office

With the proposed regulation, the procedure of the inventory declaration (“pre-registration”) of non-employees in the e-Ε.Φ.Κ.Α is abolished. and is replaced by the direct registration of the citizen as an insured self-employed person, when he starts or changes jobs at the Tax Office. This simplifies the process of starting and changing operations at the Tax Office, as the prior receipt of the inventory statement by the insurance company will not be required. With the interconnection of the information systems of the involved services, the e-Ε.Φ.Κ.Α. will now be able to receive the information of the start / change, without the need to pre-register the insured with him, in order to start work at the Tax Office or add a new activity to the insurance of e-Ε.Φ.Κ.Α

3. 10-day paid leave for parents for rare diseases of children

The provision of article 43 of law 4808/2021 (Law on Labor Protection) is supplemented, which provides for a 10-day paid leave due to serious illnesses of children, with provision for children suffering from rare diseases included in the ORPHANET list. Diseases are considered rare when they affect 5 in 10,000 people in the community, are characterized by high heterogeneity and most of them are genetic in nature (autoimmune diseases, congenital malformations, etc.). It is reminded that this leave is excellent and is given in addition to the child sick leave and the caregiver leave.

4. Choice of insurance company for policyholders with dual status

The purpose of the proposed provision is to provide the option of joining the e-E.F.K.A. institution, which will include insured persons, who belonged to two main insurance institutions due to their capacity (engineers, lawyers, doctors) until December 31, 2016 and paid double contributions even though they had one job.

Article 20 of Law 4488/2017 disconnected the inclusion in the insurance of lawyers and engineers from the registration in the Bar Associations and the Technical Chamber of Greece, respectively. From January 1, 2017, lawyers and engineers are subject to the insurance of e-Ε.Φ.Κ.Α. as self-employed if they start practicing the profession at the competent Tax Office. and as salaried or salaried, respectively, provided they are employed by a particular principal or employer, respectively. In the second case, an issue arose for the competent insurance company from 1.1.2017, especially for persons with “closed” books.

In the Katrougalos law there was no provision for the selection of the former institution, in which the insurance period will be considered to expire from 01.01.2017 onwards, if the insured did not choose the continuation of the double insurance, with the consequence that an issue arises in the foundation of his pension right.

With the proposed regulation, the insured are given the right to choose a former body. In particular, at the request of the insured to the e-E.F.K.A. which must be submitted by December 31, 2022 and will refer to January 1, 2017, the applicants will choose the former institution, with the provisions of which they will continue their insurance within the e-Ε.Φ.Κ.Α. An application for the selection of a former body will also be able to be submitted by persons who have already submitted an application for retirement, in order to determine the person responsible within the e-E.F.K.A. service for the processing of their retirement application, as well as insured persons who have chosen or are choosing the optional payment of a second contribution, since for the latter the institution on the basis of which the employer pays the corresponding contributions must be determined.

5. Coverage of insurance contributions by the state for companies that were closed on January 25-26 due to “Elpis”

For the companies whose operation was suspended on January 25-26 in the areas that were put in a special mobilization of Civil Protection (Regions of Attica, Crete and South Aegean, Regional Units of Boeotia and Evia of the Region of Central Greece) a regulation is proposed to relieve the consequences. this suspension for both employees and companies. In this context, it is provided for the coverage from the state budget of all the contributions of the employee and the employer and for all the insurance branches for which an insurance obligation arises. For the days of suspension, the payment of the salaries of the employees by the companies is also foreseen. The manner, the time and the procedure for the coverage of the insurance contributions to the e-EFKA and the details of the submission of the Detailed Periodic Statements will be regulated by a decision of the Minister of Labor and Social Affairs.

FROM THE PRESS OFFICE